Just few days ago, on Saturday April 1st, we had a cultural dip into the historical and art atmospheres of Salento, attending an interesting conference that took place by the ‘Gallerie Teatro Tartaro’ in Galatina, organized by the local Club for UNESCO. In details, the round table was about the precious ‘Orsiniani’ frescos situated in one of the most important Romanesque and Gotic art monuments in Apulia, the Santa Caterina d’Alessandria Basilica.

The architectural structure of the basilica was built during the second half of the 14th century on a preexisting church, which dated back to the 9th – 10th century, according to the will of Raimondello Orsini Del Balzo, prince of Taranto and Count of Soleto. The legend tells that the prince, back from the crusades, headed for a pilgrimage to Mount Sinai and, after stopping by the monstery for paying homage to the body of Santa Caterina D’Alessandria, in a daring way, brought one of her mummified fingers in Italy. The relic was mounted in a reliquary made of silver and nowadays it is still kept among the tresaures of the basilica. After Raimondello’s death, at the beginning of the 15th century,  his wife, Maria D’Enghien, Countess in Lecce, and her son, Giovanni Antonio, continued the works of patronage for the basilica in Galatina and for the magnificent three architectural ordered spire in Soleto, by calling together artists from different painting schools in Italy and expert workers.

On Sunday morning, April 2nd, a historical cortege took place in Soleto, a small center that is only few kilometers far from Galatina, where it is possible to contemplate both the beautiful spire of Raimondello and sometimes you have also the chance to visit the tiny precious church of Santo Stefano, an authentic work of art for its decorated walls with sacred scenes.

The historical cortege of Maria D’Enghien advanced slowly along the narrow paved streets of the old center to the roll of the drums and both the local people and the visitors from the neighbouring towns and villages could admire the refinement of the dresses, worn with elegance and style. Attending the event was an invitation to read a bit more about the local history and its characters. 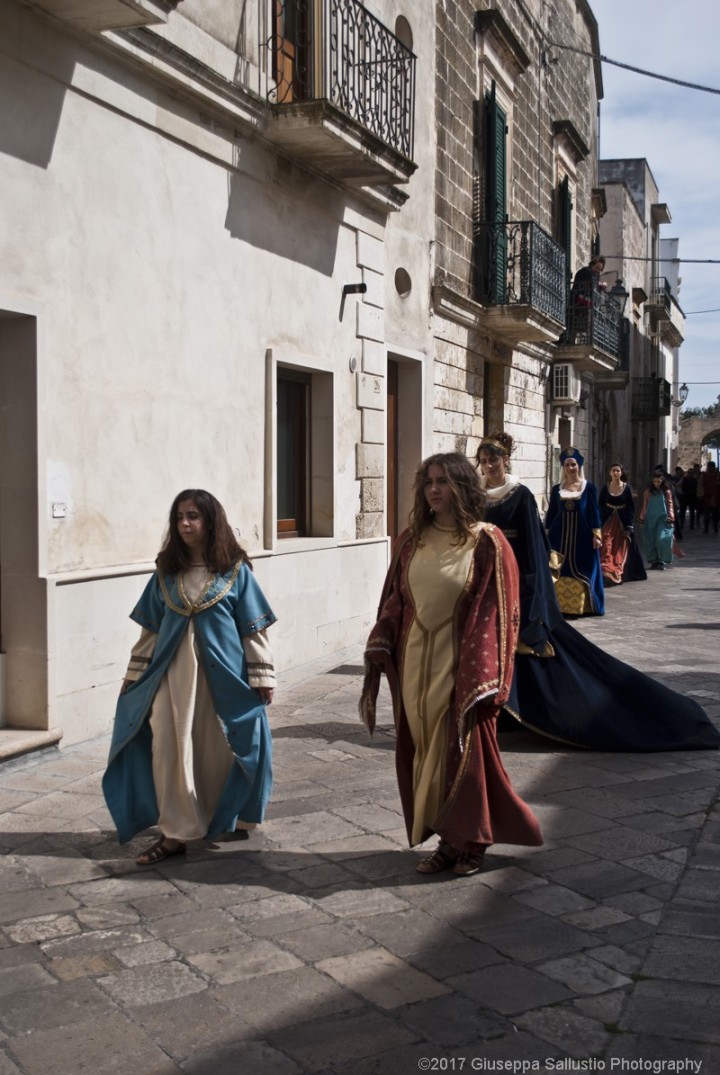 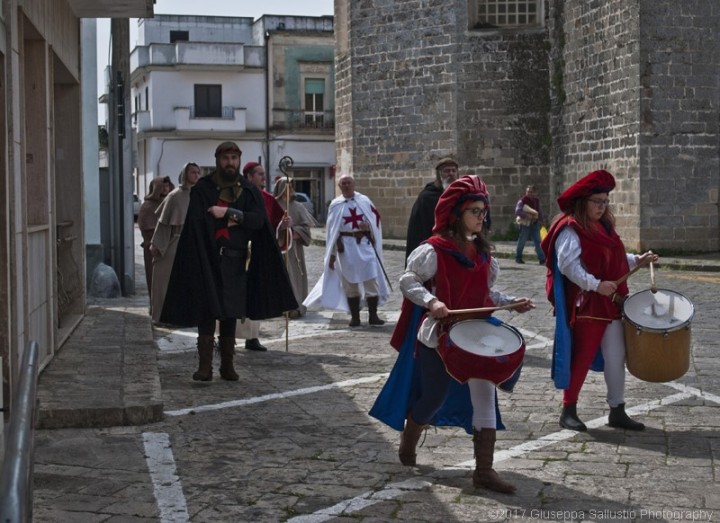 Grown-ups and children showed great care in performing the historical cortege of Maria d’Enghien and later on, it was amusing to watch all of them playing and having fun, cheered on by families and friends. In the end, even some parents joined the games. 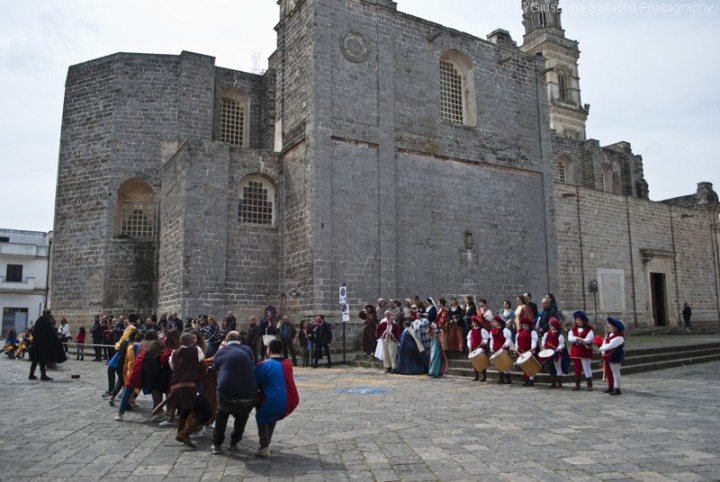 In the afternoon, the cortege was in Galatina, where a lot of people gathered by the door of the old town hall and most of them followed the sumptuously dressed characters in a sort of procession that ended in Piazza San Pietro, the main square, where more games, a banquet reserved to the cortege, music and dances took place. 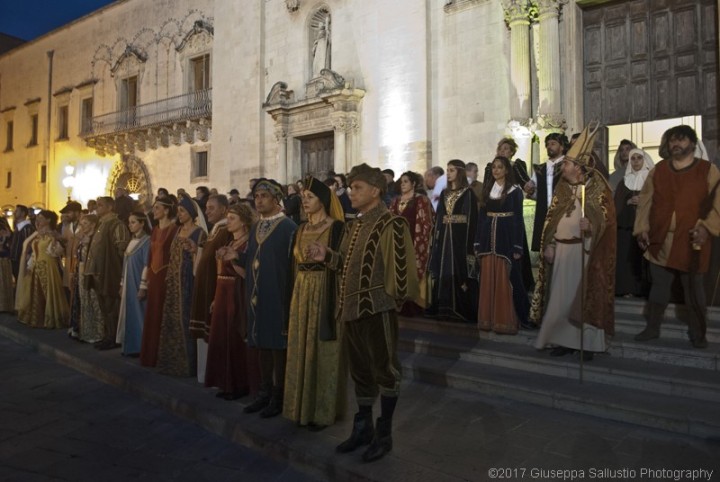 Along the way, people could stop by a banquet accurately prepared by some students of the Istituto Alberghiero ‘Aldo Moro’ from Santa Cesarea Terme (Ascalone Giorgia, Rizzo Pierpaolo, Scrimieri Luca, Pagliara Chiara, Murrone Angelo) and their teacher (prof. Piero D’Urso) and try delicacies that had tastes and fragrances of the Middle Ages cuisine. (Both of the two pictures have been kindly provided by Club for Unesco – Galatina) 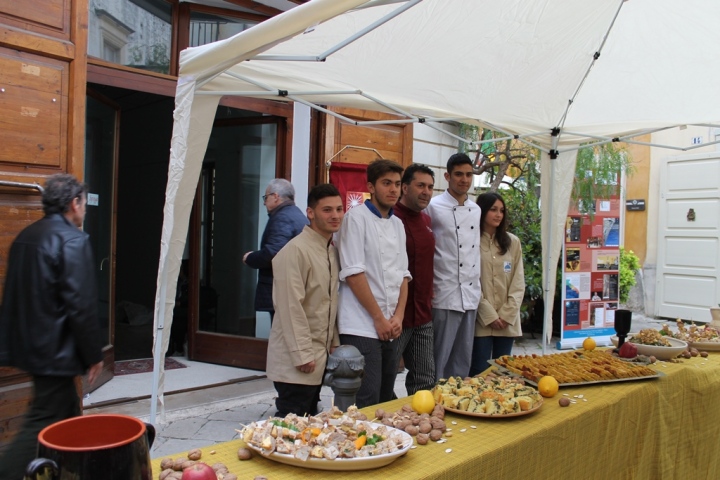 Many thanks for the remarkable commitment and all we can wish for this amazing cultural initiative is to be performed again at Summertime, when more and more people, both locals and those coming from abroad on holiday, will be glad to attend it.

This site uses Akismet to reduce spam. Learn how your comment data is processed.